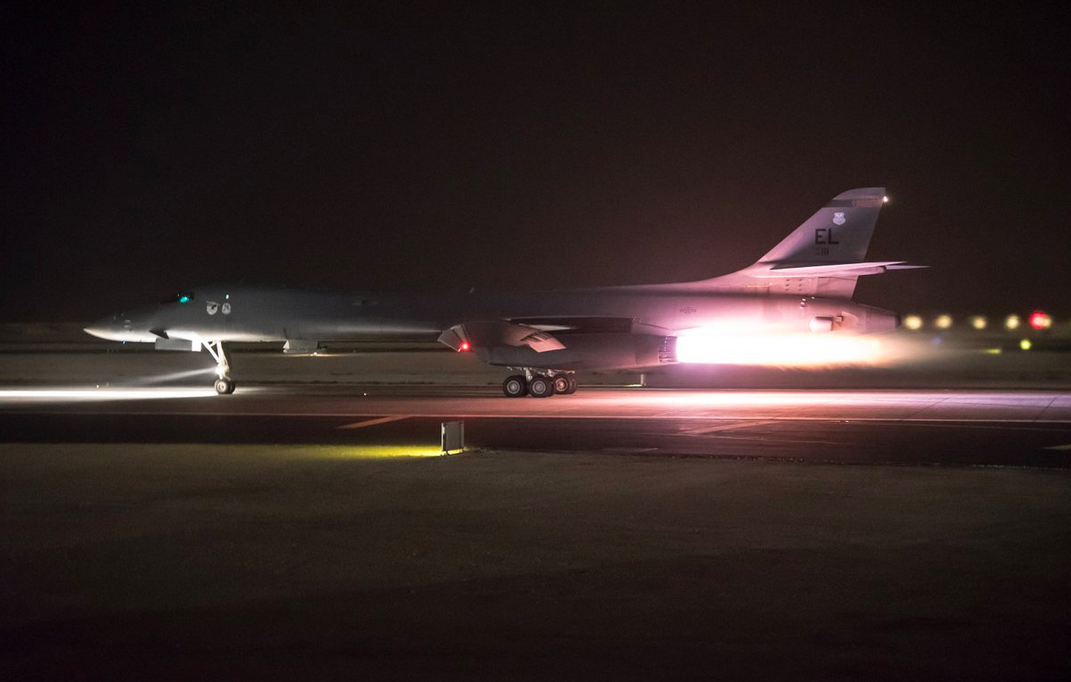 At 9 p.m. Friday, 13 April President Trump appeared on national TV. His purpose was announcing American, British, and French forces were conducting airstrikes on Syrian chemical weapons facilities Bashar al Assad used on the town of Douma Syria. The 13 – 14 April airstrike marks the second time long-range standoff weapons destroyed military targets of the Bashar al-Assad regime. On Friday just before President Trump announced the attack, I wrote an article stating why we should not attack Syria in retaliation of the chemical weapons attack on Douma. Now the President has launched the attack, and I want to relate some initial thoughts after watching the President’s speech.

Two B-1 bombers from the 34th Expeditionary Bomb Squadron made Air Force history Saturday morning at 4 am Damascus time. The Bones left their base at Al Udeid Qatar for launch points in Syria. The Bones carried nineteen Lockheed Martin AGM-158 Joint Air-to-Surface Standoff Missile, nicknamed JASSM. JASSM come from a difficult childhood. During initial tests, four launches failed miserably. The 19 missiles that were launched early Saturday morning all found their target, the Bursa chemical research facility in the suburbs of Damascus Syria.

British GR 4 Tornadoes departed their base at Akrotiri Cyprus, carrying the Storm Shadow cruise missile. The four Tornados released these weapons over the Mediterranean Ocean for their intended targets, two chemical weapon production and storage facility west of Homs Syria.

Tomahawk land-attack missiles launched from the several US. Navy Destroyers and an Attack Submarine steaming in the Mediterranean Ocean flattened the Berzah Chemical Research Facility north of Damascus. Coalition air and surface forces launched a total of one hundred and five Tomahawk, JASSM, and Storm Shadow missiles during the attack. Reviewing battle damage assessments photographs DigitalGlobe posted on their website, all weapons struck within feet of their intended aim points. The Russians stated their air defense systems would shoot down any long-range missiles. It doesn’t seem they were successful. Video coming from Damascus showed numerous surface-to-air missiles launching to intercept missiles and the popcorn of anti-aircraft shells going off over Damascus. Reports indicate the Russians did not launch any fighter aircraft or Triumph surface-to-air missiles during the raid.

That same Saturday morning, Israeli Air Force F-15I Strike Eagles attacked an Iranian base also north of Damascus. Current intelligence reports say this facility stockpiled and stored weapons Iran supplied to the terrorist group Hezbollah. Hezbollah receives significant support and backing from the Iranian regime in Tehran. The IAF attack on Saturday is the third time Israeli Defense Forces attacked Syria in the last 30 days. The previous airstrikes destroyed Iran’s UAV command and control facility and aircraft on the ramp at Tyias Airfield east of Homs Syria after an Iranian drone penetrated Israel’s airspace. An IAF F-16I Sufa was destroyed during the raid, the aircrew ejecting over the Judaean mountains and severely injuring one of the aircrew.

US, British, and French long-range weapons were employed because of the threat of being shot down by the Russian S-400 or NATO codenamed SA-21 Growler and SA-22 Greyhound surface-to-air missiles batteries protect the Russian airfield near Latakia Syria. Russia’s Ambassador to Lebanon stated any cruise missiles fired into Syria would be shot down by Russian air defense systems.  A quick analysis of Google Earth shows both S400 batteries Latakia. One sits at the North End of the runways, the second halfway down the East Runway. This sophisticated air defense system is comparable to our Patriot missile system. But why didn’t any of the air defense missiles fired during the airstrike reach their intended target?

I watched numerous surface-to-air missiles streak through the sky and explode. Syrian TV said their military shot down 70 of the 105 missiles fired at the three Targets. I noticed one crucial fact. The SAM warheads were exploding but with no secondary explosion, meaning they missed their intended targets. The Syrian air defense network fired blindly without hitting anything. One reason Russia and Syria SAM batteries may have been ineffective is due to American technology for infecting and rendering useless networked air defense system. In September of 2006, Israeli Air Force non-stealthy F-15 and F-16 aircraft destroyed the nuclear reactor constructed near the town of Deir Ez Zor Syria. During the 20 minutes Israeli Air Force aircraft crossed in Syrian airspace, their entire system rendered ineffective using the Senior Suter and Network Centric Collaborative Targeting programs created by US Air Force’s Big Safari office.

In recent months Russia has tried to degrade US Remotely Piloted Vehicles operations over Syria, collecting photographic evidence and transmitting full-motion video of activities on the ground. Russia deployed jamming equipment interfering with GPS satellite signals to the RPA navigation equipment. In what must be a very sore smack in the face for the Russians, Defense Secretary James Mattis and Chairman of the Joint Chiefs of Staff General Joseph Dunford said all 105 missiles impacted their aim points. Before and after pictures of all three targets show them flattened and destroyed. The success of the airstrikes indicates our air and sea-launched cruise missiles can accurately find targets in a GPS denied environment. The attack is good news for the US and our Allied partners and bad news for the Russians and Chinese.

I still maintain our primary threat in Syria remains the remnants of ISIS but more importantly Iran. The Russians may not have engaged any of the US and Allied partner aircraft or cruise missiles because of a sense of self-preservation. Our forces use High-Speed Anti-Radiation missiles to destroy air defense tracking radars. There are risks that even Putin, the Russian Air Force, and the Wagner group mercenaries are not willing to take. They learned a valuable lesson on the morning of 6 – 7 February when an attacking force of 500 Syrian Army and Wagner Group Mercenaries attacked and American and Kurdish Outpost east of  Deir Ez Zor Syria. Reports indicate of the 500 troops attacking this outpost and the over-40 vehicles involved, only 200 soldiers and two military vehicles survived the onslaught of American airpower.

There are two points you must remember when dealing with Iran. The most important concept to remember is the Iranian Republican guard Al Quids forces are not risk-averse. The Islam Shia sect of the religion teaches their young men and women since childhood if they are killed fighting the great Satan of the US and the smaller Satan of Israel they will become martyrs and enjoy a long life in Jannah, their version of paradise. The Great Prussian General Carl Von Clausewitz wrote in his book on War “If the enemy is to be coerced, you must put him in a situation that is even more unpleasant than the sacrifice you call on him to make.” The issue many of us do not understand is how to coerce a risk-averse enemy whose martyrdom reward is Paradise!

Sun Tzu stated the art of war is governed by five constants when determining conditions on a battlefield. The fourth is the Commander standing on the virtues of wisdom, sincerity, benevolence, courage, and strictness. The Iranians have such a commander on the battlefield. Every American should know who this Iranian Revolutionary Guard Corps Quids Force Commander is. His name is Major General Qasem Soleimani. He commands the Quids division primarily responsible for extraterritorial military and clandestine operations. General Soleimani is the real power figure in the Middle East right now. There have been numerous articles published about who this man is and the influence he wages throughout the Middle East. He continually visits his forces deployed throughout Syria and has flown to Moscow to meet with Vladimir Putin and Russia’s senior military leadership. General Soleimani has blood on his hands after his forces attacked and killed American soldiers in Iraq. Every American must understand the primary threat in the Middle East region are the Iranian Shia regime of Grand Ayatollah Sayyid Ali Hosseini Khamenei and the Revolutionary Guards Corps Quids forces commanded by Major General Qasem Soleimani.

My last point concerns mission creep, defined as expanding a mission beyond its original objectives after initial successes. Mission creep is dangerous due to the perilous path every success breeds in attempting more aggressive ventures, coming to a halt only after a catastrophic failure. It’s possible the Assad regime will use chemical weapons again, goaded on by Putin and the Russians, or his Iranian handlers, just to see what the US Coalition will do. Then what is our response? The one thing we do not want to happen is US and Russian aircraft going head-to-head over Syria. Nor do we want US forces defending an outpost from an Iranian mass attack on our Special Forces or the 2000 US troops stationed inside Syria. Mission creep very insidious and often unrecognized until the disaster strikes. Defense Secretary Mattis is one of the most capable men to sit in that position. He of all people understands the dangerous consequences of mission creep, and the broadening of the Syrian Civil War as US Coalition, Russian, and particularly General Soleimani Quids forces engage in an expanding and broader conflict.

The next move is up to Bashar al Assad, Vladimir Putin, and the Iranian Regime’s Quids forces commander Major General Qasem Soliemani.