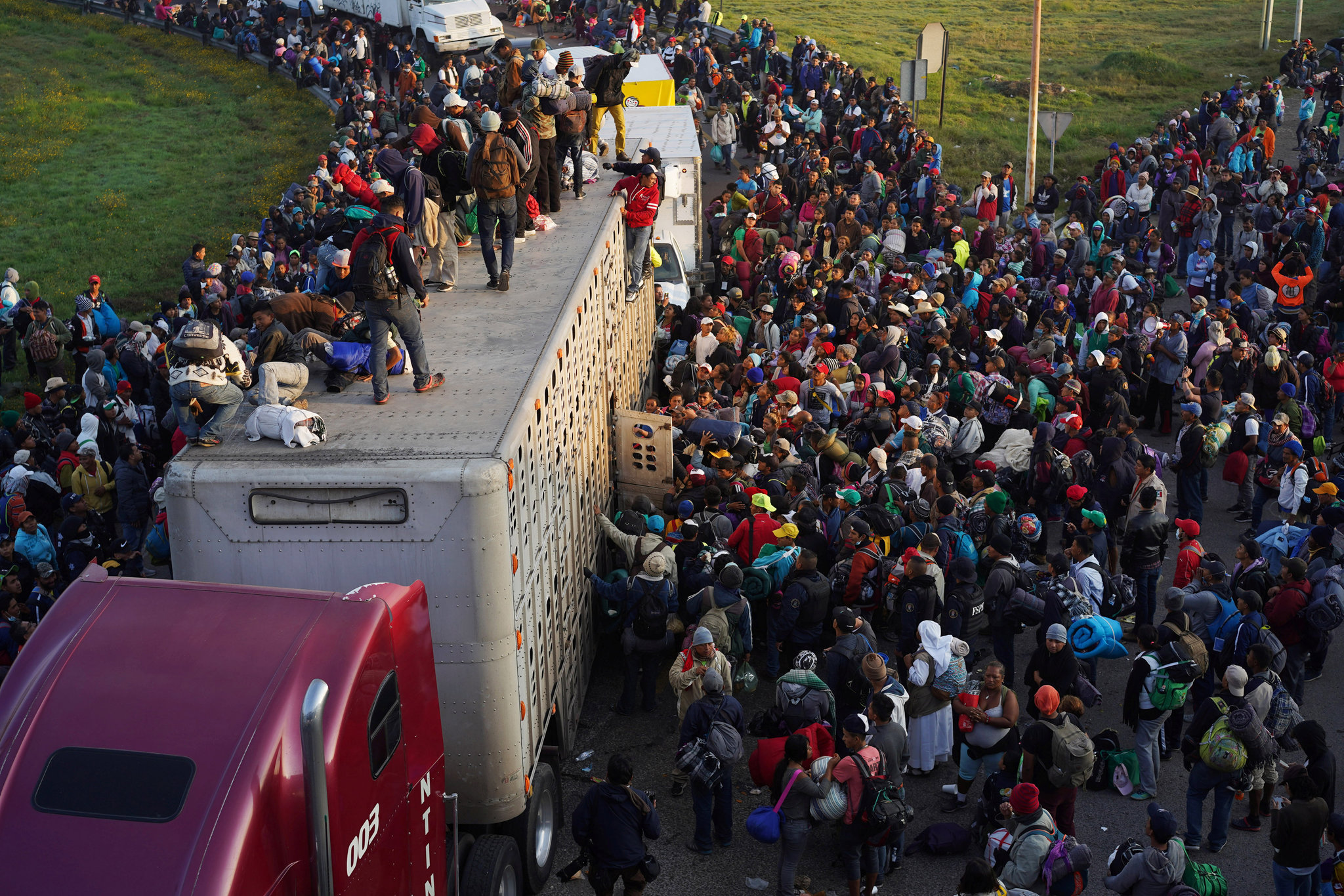 Reuters photographer Kim Kyung-Hoon snapped a picture of Maria Meza and her twin daughters running from a tear gas canister fired into a crowd of 1000 migrants rushing the US-Mexico border by US Border Patrol agents on Sunday 25 November. Kyung-Hoon’s photo appears on the front page of every news outlet. The photo is meant to tear you up emotionally. Migrant activist Jesus Ibanez stated “The sheer desperation in their eyes, the stories you hear of people fleeing from violence only to be met by violence here, was disheartening…” Liberal progressives and the main stream media continue to say how barbaric gassing children is, Governor-Elect Gavin Newsom of California saying in a tweet “And we will not stand for this.” 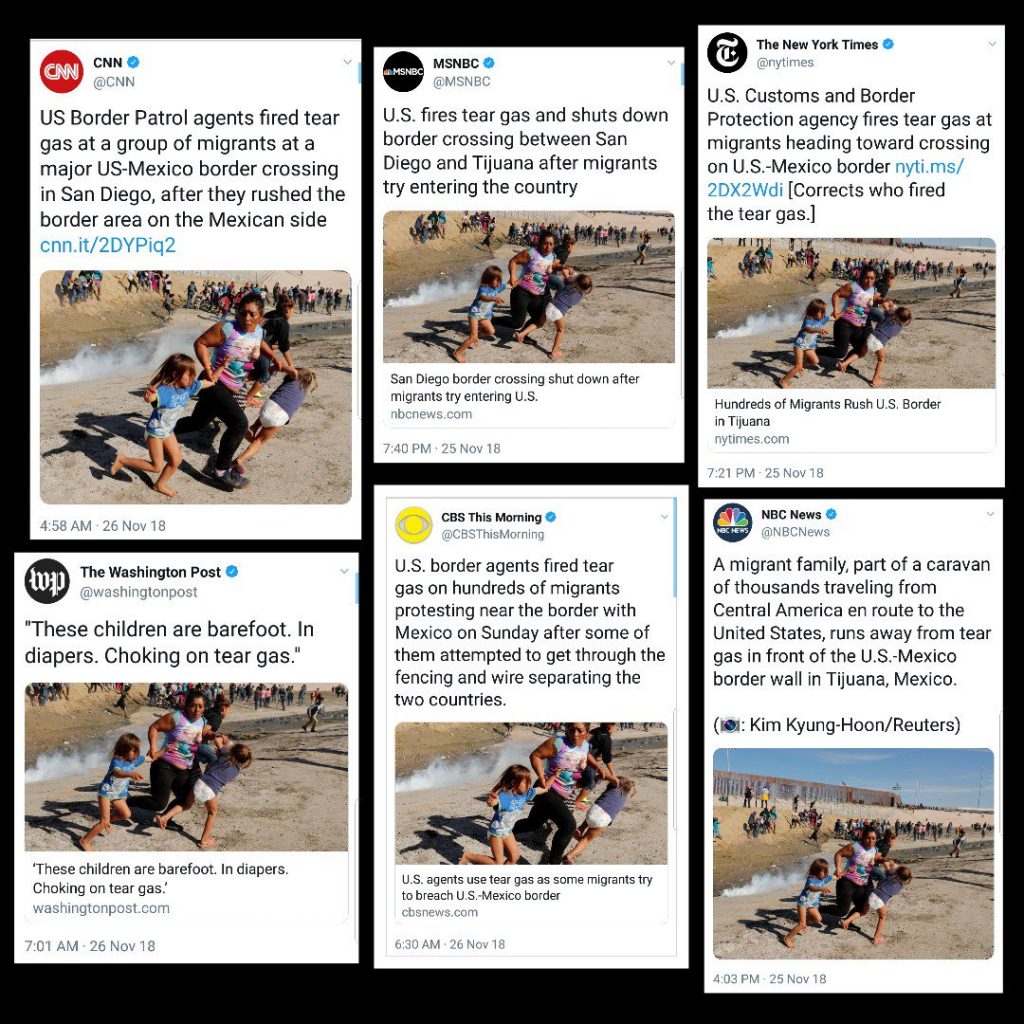 How? What is the real story behind the photo and event?

Everyone should view Ami Horowitz documentary he recorded while traveling with the caravan.

Ninety to ninety-five percent of the caravan are males. There are very few women and children traveling in the caravan but the media focuses on that demographic. Ever present is the activist group Pueblo Sin Fronteras says Horowitz, clad in black T-shirts and colored vests. They are the caravan organizers and funding of millions of dollars. Pueblo Sin Fronteras advocates a world without borders, read no walls or national sovereignty. Read closely what they have on their website. Pueblo sin Fronteras organized the buses and trucks moving the thousands in the caravan. From their website, “We accompany migrants and refugees in their journey of hope, and together demand our human rights.” Heard anything about Pueblo sin Fronteras’ demands in the main stream media? Since when is it a “human right” to live in the United States?

The migrant group rushed the US border placing women and children in front of the wave. Remember the human shields seen in the Middle East? They are trying to provoke a response, which the main stream media will always misrepresent. Homeland Security Secretary Kirstjen Nielsen wrote a long nine point Facebook post saying the event was “entirely predictable.” Males in the crowd threw rocks and parts of cinder blocks at Border Patrol Agents rushing the border while women and children kept Border Patrol from engaging directly.

Which prompted the use of tear gas. Border Patrol Agents have a right to self defense. President Trump is being excoriated for using “chemical weapons” on women and children in this single event though, typical of the MSM and liberals. Yet the media has not mentioned once the number of times Border Patrol Agents employed tear gas under the Obama Administration.

Does the photo tell the real story though? Remember, a single photo is a moment in time which never gives the context for when it’s taken. Notice every media outlet in the collage above used the SAME picture of Maria Meza and her twins. Makes me skeptical of the story. Several people examined the photo of Maria and her twins, focusing on the four quadrants behind them. There are a lot of cameras making it looked staged. Why are there no other photos? One examiner measured the distance from the bridge to where Ms. Meza is standing, three quarters of a mile according to Google Earth. That’s an arm the New York Yankees want.

Here’s my “So What”… As my father told me over and over again, when it comes to news events and the images shown, believe none of what you hear and half of what you see.

“This is an invasion!” is no longer a statement by President Trump, residents of Tijuana are now saying the same thing. Migrants are aggressive, vulgar bullies according to other residents. Will that state of mind change when arriving in the US? Nope.

Sunday’s use of tear gas and the MSM coverage is propaganda at its finest. Many Americans are falling for the fake narrative when a little investigation goes a long way. Bottomline, none of the people Ami Horowitz interviewed said they are seeking asylum, they are coming to the US for economic and educational reasons. Economic and educational shortfalls are not asylum criteria. I agree with something Glenn Beck said the other day on his morning radio show. The Migrant Caravan will become the US version of Israel’s Palestinian State struggle. And you know how this has turned out for the Benjamin Netanyahu government. Violence along the Gaza Border has been intense. As the residents of Tijuana know, this situation only aggressively intensifies over the next couple weeks as the Christmas holidays approach. Liberals and progressives are trying to stifle the conservative immigration narrative and the main stream media’s photos are the tools for facilitating the propaganda.