If you ask American citizens on the streets why there’s a dispute between the US and China in the South China Sea, they probably wouldn’t know an answer. Even though there has been some very tense moments between the two militaries, most people can’t answer the question why the US and China have a disagreement in this sea. The dispute actually goes back to the end of World War II. In November of 1946, the Republic of China sent naval ships to the South China Sea after the surrender of Japan, creating what is now called The Nine Line. This imaginary territorial line goes through the entire South China Sea claiming those waters and Islands for the Chinese. When the Communists took over mainland China, the line was adopted by the new government. Problem was the area was also claimed by Brunei, Vietnam, Malaysia, Indonesia, and The Philippines. But why are nations so anxious to claim this area?

The People’s Republic of China now has the means to enforce the Nine Line territorial boundaries in the South China Sea. They have taken small reefs and made them into larger islands with 10,000 foot runways, sophisticated radar detection systems, and modern air defenses. Some of the buildings on the islands are four stories tall, looking identical to military headquarters buildings. But the Chinese still dispute they are militarizing the islands. Good intelligence from open sources tells a completely different story. The Chinese are militarizing the islands with their sophisticated military equipment. Let’s take a few moments and look at what Google Earth shows us. Let’s examine Woody Island in the northwest area of the South China Sea. 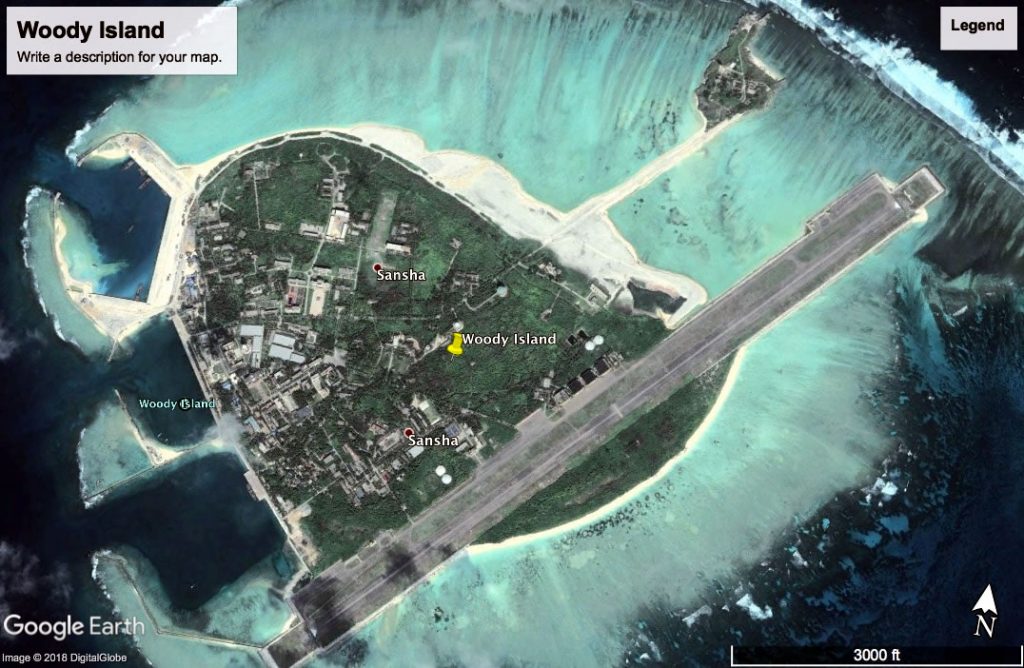 The next picture was taken on 25 April of 2016. I want to focus on just a few areas. Again this is just one island out of four with a 10,000 foot runway, long range radar, and Surface to Air Missile or SAM sites. Our first close look will focus on the north end of the runway. 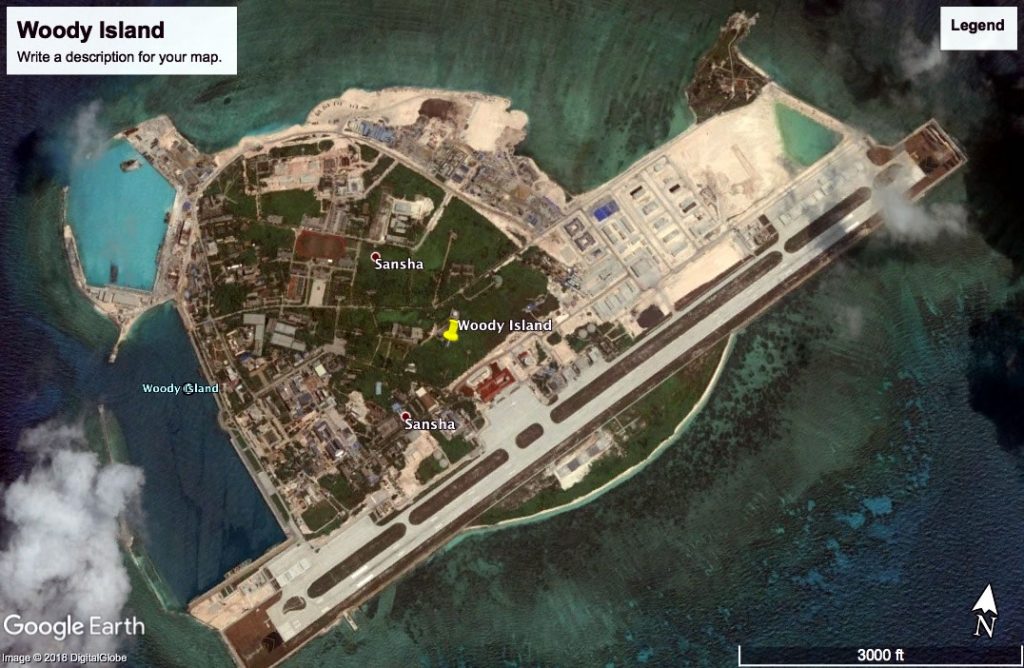 A close up of the north ramp clearly shows two People’s Liberation Air Force Su-27 Flanker interceptors on the ramp. One sits behind a Quick Reaction Alert hanger, and a second appears to be in a maintenance area, possibly for engine runs. Twelve aircraft can be housed in this long facility. 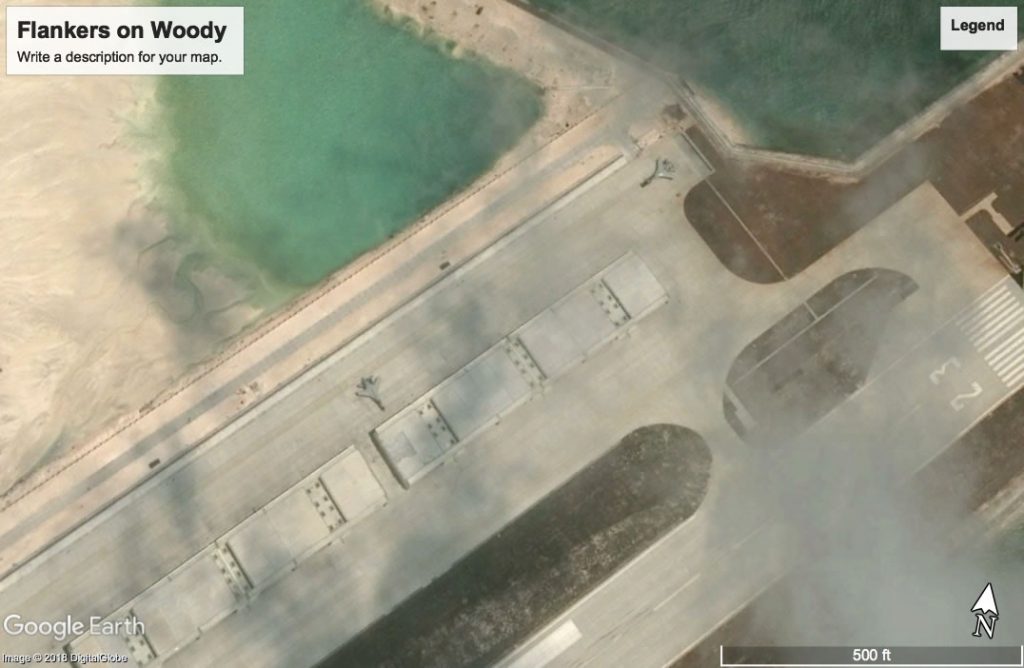 A second quick reaction alert facility is at the southwest end of the runway. These facilities allow armed Flankers to be housed away from the weather, but be able to take off within minutes of incoming US bombers or fighters. 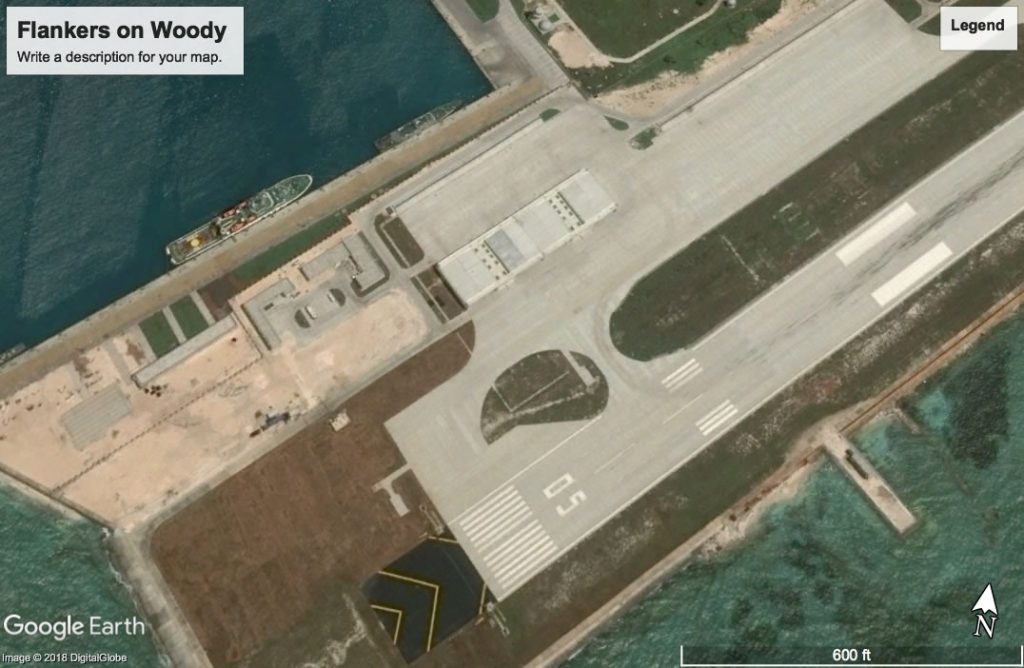 One very interesting thing I noticed looking at these pictures was a parking area in the middle section of the runway. You can see a helicopter parked there, notice the rotor blade shadows. Parked right of the helicopter is a Remotely Piloted Aircraft or RPA. The long wings of the RPA tell you this vehicle is meant to stay up for long periods of time. Look at the wings of our Global Hawk RPA and the U-2 Dragon Lady spy plane, they are what we call high aspect ratio wings. These long wings are made for endurance; staying airborne for long periods of time. This RPA is probably used to fly long endurance missions over the South China Sea collecting electronic and video intelligence. 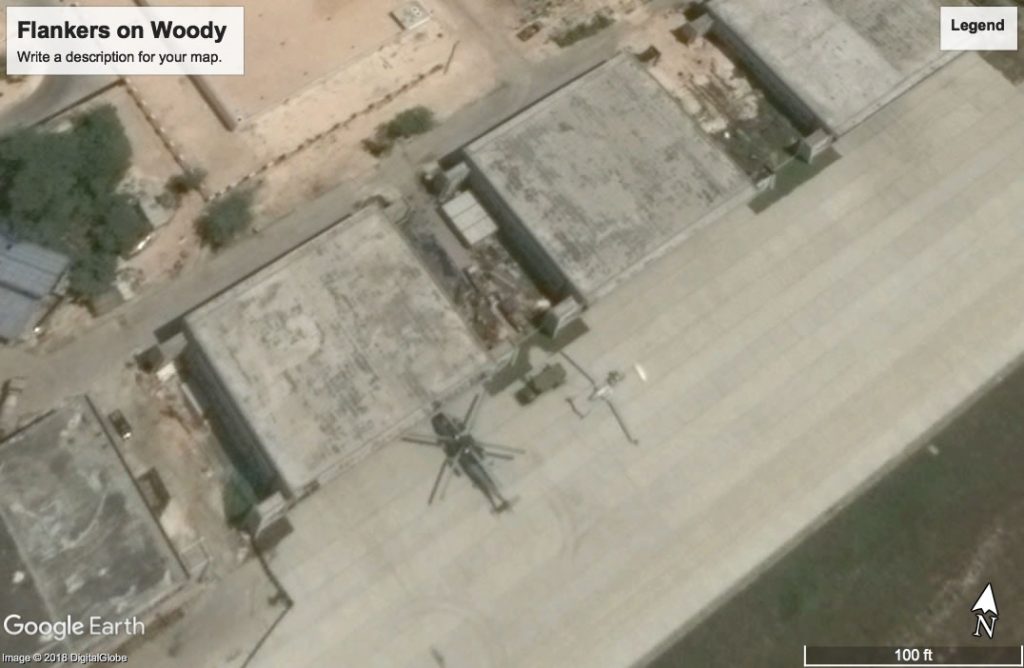 A mere 440 meters from the Flanker parked in front of the Quick Reaction Alert Facility is a large weapon storage area. You can tell it’s a weapon storage facility by the shape of the concrete bunkers and the blast doors. This area is fenced in with a posted guard at the entry point to the ramp. Alamo and Archer air to air missiles arming the Flankers can be transported from this weapon storage area to any aircraft in a matter of minutes. 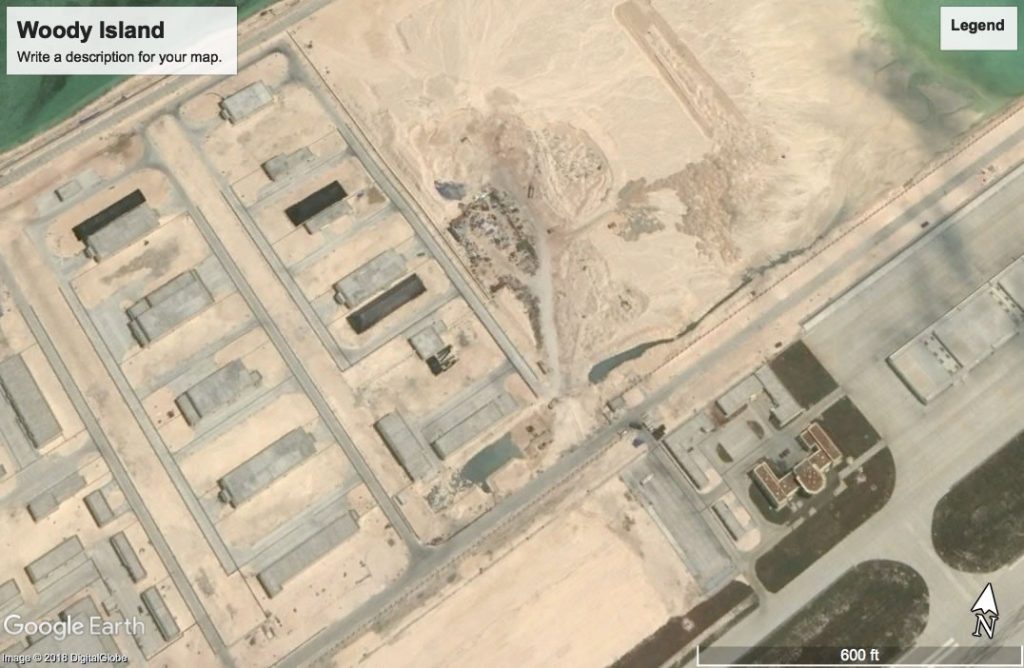 At the very north end of the island there is a large concrete pad. Several vehicles can be seen out in the open. Many of these vehicles appear to be part of a Surface-to-Air Missile system, parked there to defend the island. In this picture you can see three vehicles out in the open. 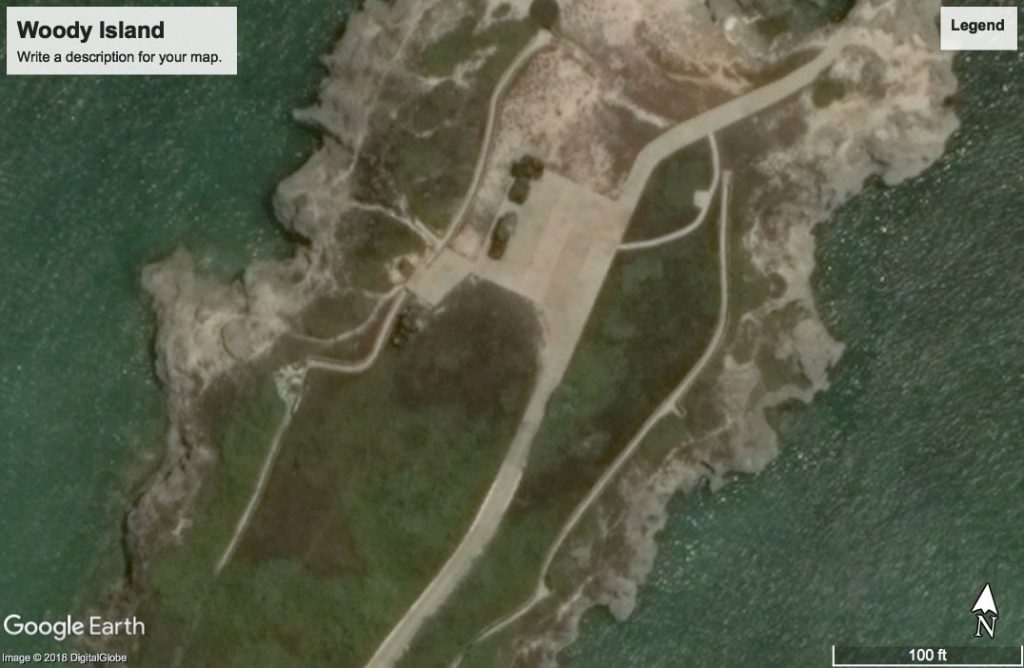 Just a little farther south of the pad is a series of antenna towers. You cannot see what is contained inside the towers, but you can tell they have been built high for a better look across the horizon. One tower is clearly three times the height of the others. 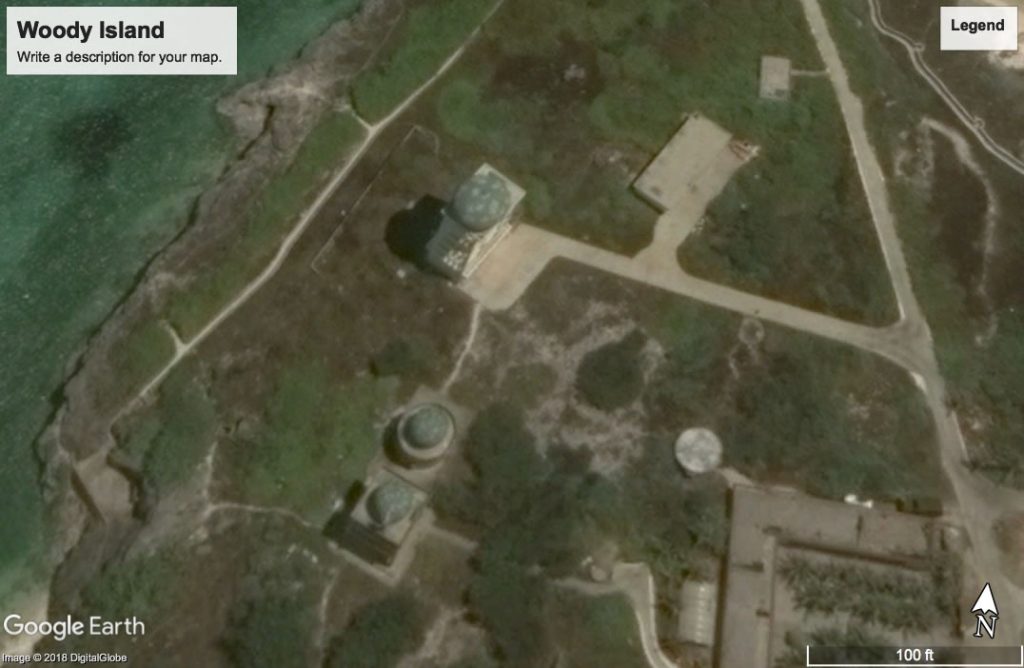 China created other artificial islands in the South China Sea. In September of 2015 a Navy P-8 Poseidon Maritime Patrol aircraft flew within miles of Fiery Cross Reef. Fiery Cross Reef is another man-made islands with a 10,000 foot runway and defenses. While collecting photographic intelligence of the island, the Chinese Liberation Navy made radio warnings for the P-8 to move away from the island. The photographic intelligence collected by the P-8 clearly showed construction of a long runway Chinese bombers could use and numerous buildings under construction. Days after the P-8 made this flight, the Chinese issued a very stern warning to the US about flying close to the island. their foreign minister made stern warnings about being close to the island. They mentioned several times that these flights could be considered acts of war.

In October of 2015, the Arleigh Burke-class Destroyer USS Lassen sailed within twelve miles of Subi Reef. In July 2017 two B-1 bombers from Guam flew a long range mission around the disputed islands. These events incensed the Chinese. The Navy P-8 Patrol planes gathered excellent intelligence of the build up on the islands, while recording warnings to leave the area form the Chinese Navy. It’s obvious to even the most casual observer these islands are going to be used for military purposes. Any ship or air traffic could be stopped through this region by airplanes and surface ships supported from these islands in the South China Sea.

I hope in some way this gave all of you an military analysts look at why the dispute in the South China Sea is so important to us and world economic interests. The Chinese will continue to tell the world they have peaceful intentions in the South China Sea. Recorded photographic and recorded radio traffic evidence would tell us otherwise.